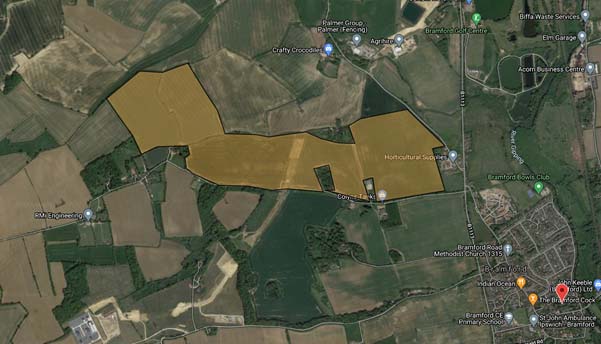 EDF Renewables are proposing to develop a 65 82 hectare solar PV facility on arable land along Tye Lane Bramford (yes next to two other proposals here) for 35 years that will export 49.9MW of electricity per year.
They “claim” that it will:

49.949.9MW is the equivalent of 437,124,000kWh per year. But the sun doesn’t shine all the time, so solar plants only generate electricity roughly 10% of the entire year, so that’s 43,712,400kWh. EDF have used a figure of 4751kWh per house in the Mid-Suffolk District (the source of this is not named and is so far elusive in searches) and 10.5% to get to their 9,690 homes. However if the government want us to all switch over to electric cars (the 40 year life of the solar plant would see the ban of petrol & diesel come into force) then it’ll be closer to only 6,500 homes that it will be supplying electricity to.

The solar plant will connect into Bramford Substation, which is already a low carbon substation by serving nuclear and offshore wind plants, and which over their full life emit less CO2 per kWh than solar anyway. It is not replacing any coal or gas plants. So it’s unclear what CO2 emissions they’ll actually be displacing. Solar also takes up significantly more land space, removing arable land from UK production and increasing the need for more food imports (and the CO2 to transport it here).

This would be paid as £20,000 annually over the 35 year life of the project. EDF stated in a public webinar that this would be index-linked which is good (i.e. it would go up with inflation), but how it is actually distributed to the local communities has not been disclosed by EDF. And when split out between the large number of communities impacted it works out to be very little. What is the true cost of losing 82ha of arable land and green space to the local community and wildlife?

Did you know that 82 hectares of arable land is…

That’s an alarming amount considering the UK is only 61% self-sufficient for food,
but produced 42% more electricity than at peak demand in 2019.

The proposed site area would cover 202 acres of arable farm land. According to the limited information supplied in the application the majority of the site uses high quality agricultural land graded as 3a, and some of 3b. The Mid-Suffolk Interactive Map it shows the entire site area to be of Grade 2 classification. Grade 2 and 3a is also known as “best and most versatile” agricultural land, i.e. the good stuff.

Local residents who travel Tye Lane will know that the fields alternate between wheat, barley, oilseed rape, and occasionally sugar beet. All important sources of basic food, and essential to reduce the UK’s dependence on food imports and the CO2 emissions of the transport to bring it here. The sugar beet pulp is even used by British Sugar to generate electricity after they’ve extracted the sugar.

To convert such a large area of prime arable land over to such a small amount of solar power production would be a wasteful use of the land for a minimum of 35 years. To improve our environment there is a need to reduce the carbon miles our food travels and improve our food security as the global population continues to increase.

The proposed site is nestled between the village of Bramford and the hamlet of Bramford Tye. Both of which are surrounded by a designated Special Landscape Area (SLA), highlighted in green below. The site is in red.

The landscape of this area to the west of the B1113 is predominantly that of undulating wide-open arable landscape. Where the hedges part in various places along the road you can see for miles (this is also useful for road users). And some of the views are breath taking.

Along the top of the site boundary line in the middle there is a small dip in the shape of the site. This is home to a family run campsite, which is visited from by people all over the UK who cherish these views. It would be surrounded on all sides, bar a dirt track to the north, by an industrial facility of glass and metal.

This photo below for example is taken opposite the Anglian Water facility at the top of the hill on Tye Lane. It looks across the biggest field in the proposed site towards the NE. As you can see, it goes on for a rather long way, with the SLA in the distance.

Whilst the developer has proposed to line the entire Tye Lane roadside length of the site with hedgerows, this seems such a beautiful sight to lose with the farmland, along with that of the SLA in the distance.

There are no headgerows proposed along the public footpath on the north ridge, which overlooks the village of Little Blakenham. Nor is there any proposed hedgerow along the footpath and access track to the campsite mentioned above.

What has happened in the process so far?

EDF hosted two webinar Q&A sessions in November 2020. You can watch the replays on the EDF website.
We also have some DVDs available of the webinars if you cannot watch online. Just contact us.

EDF Renewables were required, by multiple statutory consultees, to provide further information and assessments because the application was lacking in sufficient detail. Once new documentation is available a re-consultation will be opened for the public to response to.

How can I help protect all of this?

Right now this planning application is open for public comment. This post explains how to lodge your objections with the Planning Officer at Mid Suffolk District Council.

The CARE Suffolk response has been finalised and can be read here.

Thank you for reading this and supporting us!

This website uses cookies to improve your experience while you navigate through the website. Out of these, the cookies that are categorized as necessary are stored on your browser as they are essential for the working of basic functionalities of the website. We also use third-party cookies that help us analyze and understand how you use this website. These cookies will be stored in your browser only with your consent. You also have the option to opt-out of these cookies. But opting out of some of these cookies may affect your browsing experience.
Necessary Always Enabled
Necessary cookies are absolutely essential for the website to function properly. These cookies ensure basic functionalities and security features of the website, anonymously.
Functional
Functional cookies help to perform certain functionalities like sharing the content of the website on social media platforms, collect feedbacks, and other third-party features.
Performance
Performance cookies are used to understand and analyze the key performance indexes of the website which helps in delivering a better user experience for the visitors.
Analytics
Analytical cookies are used to understand how visitors interact with the website. These cookies help provide information on metrics the number of visitors, bounce rate, traffic source, etc.
Advertisement
Advertisement cookies are used to provide visitors with relevant ads and marketing campaigns. These cookies track visitors across websites and collect information to provide customized ads.
Others
Other uncategorized cookies are those that are being analyzed and have not been classified into a category as yet.
SAVE & ACCEPT
%d bloggers like this: